WITCHES OF THE WEEK #21: RADIO COMPASS 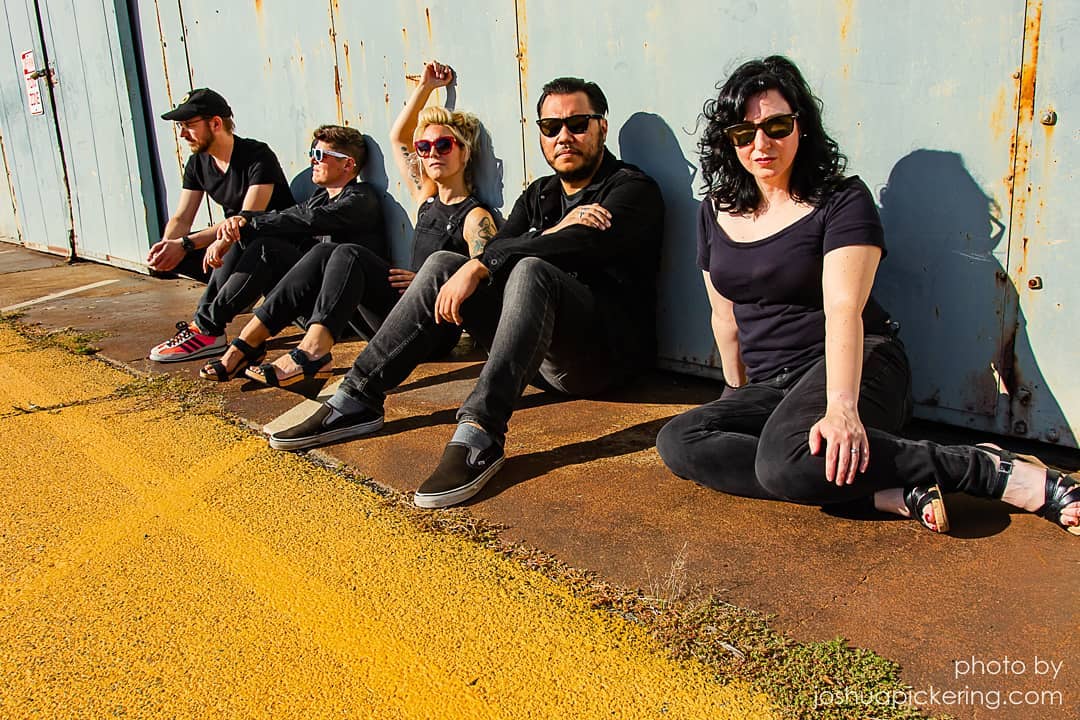 1- Where is the band from and what's the best thing to do there?

Angela: We are based out of Salem, MA (also known as “Witch City” to many because of the Witch Trials) north of Boston. But also consider ourselves a Boston Band- I’ve lived there, Jill lives there.
Salem is a dope City-Town with cobblestone streets, antique colorful homes, lots of places to eat and drink and be merry. Very easy to fall in love with. We have a couple awesome music venues that do lots of punk, indie, metal music. The best deal is to come in the warm season, take the train or ferry in, hit up the beach and then a show later. And of course, we have one of the biggest Halloween celebrations around. Come by next fall and we’ll be your tour guide.

Franklin: I love drinking on a patio that’s on a cobblestone street on a warm summer night. Oh, and cookies from Goodnight Fatty

Kerry: Agree about warm summer nights, walking/drinking on cobblestone streets - Getting a flight of cider from Far From the Tree and shopping at all of the amazing small businesses that you will never find anywhere else.

2- What does your band name stand for and what was the runner up?

Angela: I distinctly remember being at a local bar, The Witch’s Brew, with a friend of mine scribbling name ideas down on a napkin and asking the bartender for feedback. Radio Compass seemed best representative of finding my way back to playing after a 5 year hiatus. I love the word Radio. It’s just a really great word. My friend and I also explored a lot of nautical terms and realized that the whiskey was making them sound better than they actually were.

Andrew: It’s an acronym for something very yucky that you can’t print

Angela: Yeah, that’s the real story. He got me.

Angela: Eternal Sunshine of the Spotless Mind comes to mind? We probably are more like the movie previews before a movie. A hodgepodge of stuff.

Kerry: Wet Hot American Summer
4- What song would describe each member of the band?

Andrew: ^ Sound Travels From The Snow To The Dark (Frog Eyes)

5- Name 3 bands who would headline your dream fest?

Franklin: Can I just say three Green Day sets in a row?
Andrew: fuck yeah, I only saw them once but they burned their drumset on stage at the end. I honestly get so nervous all my life in giant crowds that I can’t imagine it.

Angela: I have some alka seltzer if you need it, Andrew.

6- Your opinion on being described as "female fronted"?

Angela: Mixed feelings. I definitely think the term needs updating. As well, it honestly doesn’t really say/mean much and leaves out a lot (e.g. lgbtq, other fem musicians who may not be frontwomxn, etc). It sort of sorts information (albeit vaguely...)-- like how if you use a GPS it’s going to default to the main road or highway but you can choose or filter your route (e.g. “avoid highways”). I have used it to sort through some things. And generally tend to find more fem-heavy,nonbinary type musicians in such bands. I tend to gravitate towards fem-heavy music, always have. I want to find them, listen to them and spread the word about them especially when they are amazing and buried in a deep abyss of cyberspace and social media algorithms. Don’t get me wrong, I have also felt trapped by the term and want to be considered part of the larger picture (but devil’s advocate-- where am I getting the message that there is something “wrong” with fem-heavy bills and being described as such…?). But yeah, most people don’t want to be/feel typecast. I think it also depends on the intentions of the person writing it and reading it. This is a vague descriptor or “filter” at best.
We are going to assume non-female fronted bands are the “norm”, right? But that is actually getting better (at least underground music). For instance, I no longer search “female-fronted, fem-whatever” for indie rock because indie has gotten much more diverse in who is playing and writing but I will still search / filter for things like “female-fronted / lady / fem / grrl’ in metal genre-- unless I want to take the “highway” but I generally prefer the scenic route when I’m listening to or looking for good music). So in summary, good question ;-) Long & long of it is mixed feels and the term needs updating for sure.

Andrew: I have never been described as ‘female fronted’ or ‘male fronted’ but I don’t think I’d care much either way.

Franklin: I hate it. I feel like it lets the dumb people form a preconceived opinion on us without hearing a single note.

Kerry: It depends on the context. “Female fronted” is not a genre. I hate it when it is written to describe the genre or the sound of a band. But when written in a sentence describing a band’s essence or perspective on what they are writing/singing about, used in a way to empower women in speaking their mind, I’m all for it.

Angela: True story, what she said.

7- Are you signed on a label and why?

Franklin: I wouldn’t say ‘no’ to the right offer.

Andrew: Labels are for cans! And we’re a bunch of can’ts.

Angela: I have no idea what that means, haha. No we are not but I don’t think we’ve ever attempted. So if you know someone, give em our digits (like, phone digits, not our fingers and toes).

8- What's the most punk thing you've seen on tour/in a show?

Franklin: Well, last time we were in Montreal, we played on a strip club stage. I feel like that should count.

Andrew: The economy gets pretty weird sometimes. Stumbled into a neighborhood in Phoenix that had their own currency. Also an older couple paid me for a t-shirt with weed in Charlotte. I don’t even smoke weed but heck yeah.

Kerry: I tend to walk in on people having sex in club bathrooms while on tour. I can’t think of anything more punk rock.
The most punk rock thing I have seen in a live show: when Sasquatch from Sasquatch and the Sickabillys (Providence) burned his pubic hair on stage at Ralph’s Rock Diner.

Angela: Honestly, bands that are just totally in the moment- regardless of crowd, crowd reaction, sound, etc. Just totally into what they do and don’t give an F. that is one of the most punk rock things out there. But I mean, if you can get some thrashing around or a pit too. Tres punk rock.

9- The best album of all time and why?

Franklin: “Cuban Ballerina” by Dead To Me. It’s flawless.

Andrew: I’ll say Dig Me Out just because that was such an important record to me then (and still now!)

Kerry: “Surfer Rosa” - Pixies - It just has a little bit of everything I love about music on it.

Angela: Hmm, Surfer Rosa is a damn good album indeed. Does greatest hits count? Because that might be Whitney Houston in that case. Jk, I might have to go for Surfer Rosa too. I can also listen to any Nirvana album front to back and be happy as a clam.
10- What's the best way to support your band?

Franklin: Come out to shows. If you dig us, tell your friends. Buy our shirts!

Angela: I suppose to get there requires shows to be a thing again. Way to support our band, believe in science then see us at shows on the other side of this! We’d love to visit Canada again asap! We are not the biggest fans of social media so if you like our stuff, tell your friends. Share it, share it, share it. And like Franklin said grab a tee if you like us- Our tees are pretty damn cute and tres cozy too.

Andrew: Listen to a song or two, and if you like it dedicate yourself to making as many AMVs as possible

Angela: I think I need to google AMVs…

Popular posts from this blog

December 28, 2020
Band: Dream Nails / Photographer: Jeroen Jacobs The year 2020 was probably off to a good start for many of us. The prospect of new music, new shows, new ways to kick doors down and share art that means a lot to us, was promising once again. Then, around mid march, it all came to a stop. The whole industry was placed on hold while new ways of doing things were put in place to take care of everyone around us. It didn't stop us from being heard though. It didn't take long for independant medias and artists to get the ball rolling again. After all, most of us have been doing it ourselves for so long. We were up for the challenge.  Eventually new music was recorded, virtual events became a thing, and through online communities, voices have been heard. We are proud to say that it ended up being a good year for women and marginalized artists. We have discovered so many great bands, have seen so many amazing events being organized, and most of all, we've seen all of you getting tog
Post a Comment
Read more

WITCHES OF THE WEEK #24: ITCHY KITTY

May 05, 2021
1- Where is the band from and what's the best thing to do there? Spokane Washington. Talk shit, Drink gravy. 2- What does your band name stand for and what was the runner up? Truth, Justice and the American way. There was no runner up. 3- Describe your sound using a movie title. Troll 2 (1990), not to be mistaken with trolls 2 (2010). Also the Robocop where he shoots that guy in the dick.   Feargasm by Itchy Kitty 4- What song would describe each member of the band? Ami: September by Earth, Wind and Fire Naomi: December 1963 by The Four Seasons Catman: Nightfever by The Bee Gee’s Sug: Angel by Massive Attack 5- Name 3 bands who would headline your dream fest? Iggy Pop, Hank Wood and the Hammerheads, Queen’s of the Stone Age, and Simon and Garfunkel 6- Your opinion on being described as "female fronted"? It’s boring. It has no influence over the quality of the music. 7- Are you signed on a label and why? Ya, we have a great working relationship with a local label, CorpoRat
Post a Comment
Read more

Witches of the Week #15: Smalltown Tigers

November 18, 2020
1- Where is the band from and what's the best thing to do there? We’re from Rimini. The best thing to do out here is going to the beach. 2- What does your name stand for and what was the runner up? The early runner-up was Broken Heels, but then a friend came up with Smalltown Tigers, for no particular reasons. We liked it and we thought that the name reflected who we are and where we come from. We come from a small town in the north east of Italy, Rimini, so.. You may think, why Tigers? Well, the tiger is a feline and we feel a bit like that. Of course, we could have chosen cats as well, but Smalltown Cats sounded weird for a non-rockabilly band. 3- Describe your sound using a movie title. Edward Scissorhands Five Things by Smalltown Tigers   4- Describe each band member using a meal Deb : pizza Monty : crispy French fries Castlel : low Carbo meal 5- Name 3 bands who would headline your dream fest? RAMONES, The Who and Iggy Pop 6- For or not being described as "female fronte
Post a Comment
Read more